North of the University of Minnesota Transitway lies the Southeast Minneapolis Industrial Area (SEMI)—the wild frontier of Prospect Park—now called Prospect North. SEMI is home to a few businesses, but is typified by its disused grain storage silos and railyards. The University of Minnesota Foundation is coordinating a consorium of groups collaborating on 21st-century plans for redeveloping Prospect North into a regenerative energy area with a Science Park, though proposals have a long horizon and many hurdles to overcome.

In late 2014, the Surly Destination Brewery opened amid the silos, bringing new life to this neglected expanse of Minneapolis. The area's urban ruins are visible from many points in the city, most notably the ADM-Delmar #4 elevator, known to locals as the "United Crushers" elevator.

Beginning in 2010, Prospect Park 2020, Inc. was formed to re-imagine and inspire the redevelopment of the area surrounding Minneapolis' Prospect Park light rail station in accordance with the principles developed by the Prospect Park Neighborhood Association. The vision developed by Prospect Park 2020 and endorsed by the community calls for an inspired assemblage of places to live, work, learn, discover, conduct business and play... a transit-oriented city-within-a-city and Innovation District that is a replicable model of 21st century sustainable urban living.

Beginning in 2016 a business-development group called Towerside is coordinating development efforts and soliciting input from neighbors on a variety of projects. Towerside is a collaboration of public and private partners working to transform an overlooked, asset-rich district at the heart of the Twin Cities into an equitable and restorative demonstration of 21st-century urban redevelopment.

The areas of Prospect Park Neighborhood 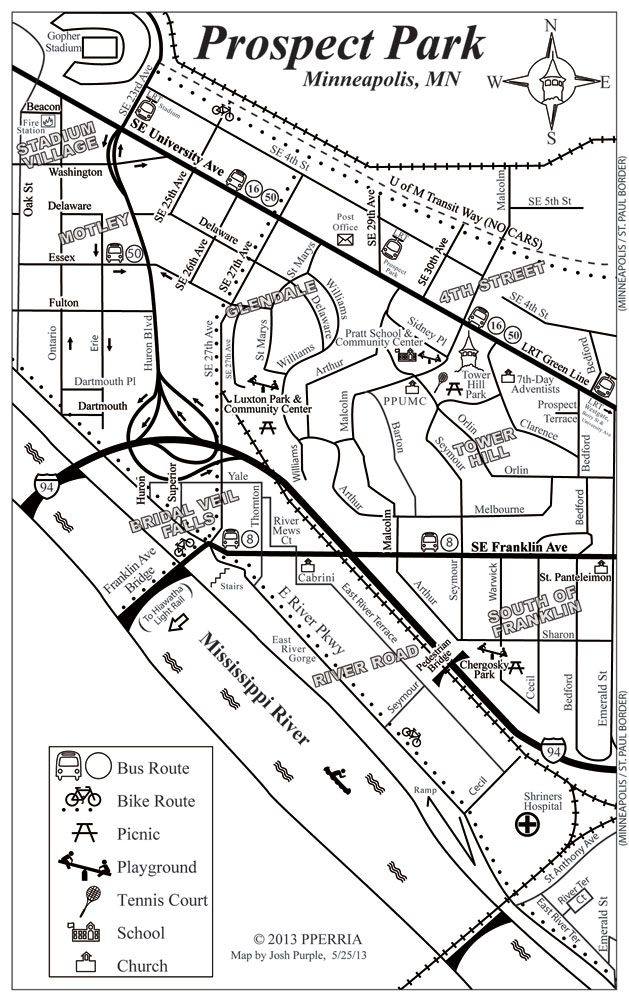